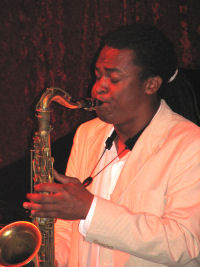 Early Years/Education: My mother bought me a saxophone when I was eight years old. I wanted to play the trombone at first but she told me, “No, you’re playing the saxophone!” She got it so I’d have something to focus my attention on, and she borrowed the money from her sister.

So I started a band with my cousin and some other kids and some of them quit, and I wanted to quit many times too. But my Mom was a single parent with four kids and that alto saxophone cost $800 ,so I hung in there and kept playing, out of guilt. Later on when I was 12, playing the sax gave me something to identify with, something I was good at, and it made my Mom really happy.

I learned to play in public schools and in the 8th grade a teacher, Jonathan Bloom, started to come around once a week. He taught jazz thru a program called “Jazz Outreach.”

In New Orleans marching bands are really popular but for a sax player I liked learning about jazz better. Then as an incoming high school freshman I auditioned and got into the New Orleans Center for Creative Arts. Going to this school changed my life. It put me in contact with other kids who were taking music seriously as well as dancers, writers, etc. The teachers are actual jazz musicians and the instruction is very high.

It’s also a very diverse place so you get to meet all kinds of people. The alumni…Wynton and Branford Marsalis, Harry Connick, Jr., Nicholas Payton, etc. also contributed to the educational experience. Two weeks after graduating high school I got a job with Los Hombres Caliente (an Afro-Cuban band based out of New Orleans) and stayed with them until I was 23 years old.

Portland: After Katrina, I evacuated to Shreveport, Louisiana for a week and a half. While there I got on the web site for the jazz station WWOZ looking for other New Orleans musicians, where they might be. There I saw an invitation that had just been put up by the Portland Jazz Festival.

Azumano Travel was offering to bring any musicians to Portland to live and work. I called and talked to Sara Smith for five minutes. I’d thought about going to Atlanta and other places but after talking to Sara I thought, “Why not?”

So I came, and I’m really glad I did. I had been here before to play Mt. Hood (with Los Hombres), but I would have never of guessed that Portland had the scene it does. Not only is there a scene here, there’s a demand for jazz.

Bands: I have two working bands right now. “Devin Phillips and New Orleans Straight Ahead” is my main band with Andrew Oliver on piano, Eric Gruber on bass, and Mark DiFlorio on drums. The way that we play we stay very close to the concept of the blues (not the 12 bar blues) but the feeling of the blues.

Jazz is very demanding. There’s a tradition that I play jazz in and I don’t stray from that tradition… I have a high level of respect for it. The other band is the “The Devin Phillips Band.” We’re a kind of jazz-funk, five to six piece group. It’s a release for me…we might play Cuban music one night or Headhunters/Weather Report another night.

I might play in these other styles but I am essentially a jazz musician. The Devin Phillips Band consists of Ramsey Embick on keyboards, Al Criado on bass, Mark Di Florio on drums, Darvey Santner on guitar and Milko Escolera on percussion.

State Department Tour: We sent in our CD and background material on the band members to Jazz at Lincoln Center (JALC) and the State Department. They reviewed hundreds of applicants and selected 20 bands to come to New York to audition.

Most Satisfying Experience: The release of my new CD, “Wade in the Water.” Branford Marsalis told me, “You have your whole life to make your first CD.” What he meant was it’s the result of your whole life’s experience up until that point. Now, on your next album you wouldn’t have as long. Secondly, winning the “Rhythm Road” tour is really satisfying!

I love jazz and I love what it stands for and for me to get to represent my country, it’s like being in the Olympics. We’ll fly out to do a concert at Lincoln Center then the Kennedy Center and then we’ll go out on a six week tour.

We haven’t chosen which continent we’re going to yet but it‘s going to happen in the next five to nine months. While we’re there we want to learn about their music and try and incorporate it into what we’re doing. We’d like to show them how diverse jazz is.

Discography: Wade in the Water, six of the tunes are original, Andrew Oliver co-wrote “To Alfa with Love.” We’d played most of this material together for a year in a variety of settings so when we got into the studio it gave the CD more of a live element. I’ve also recorded with Los Hombres Caliente.

Other: Through the ages, jazz has always been associated with having a good time and I think, as a result, people have not taken it as seriously as let’s say, the ballet. And when you go to the ballet you expect to see good ballet, uncompromised. I feel the same way about going to hear jazz.