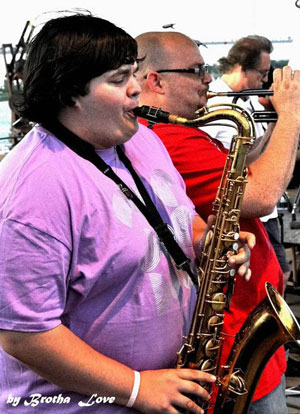 Early Years/Education: I’ve been playing the saxophone my whole life. I started on piano in the first grade, but that didn’t stick. When I was eight years old, my parents got me an alto saxophone and I started taking lessons from Andrew Baird. I was really into how it sounded, and I was into jazz too. My favorite is the tenor sax, but I play piano and trumpet too. For recording sessions I play all three. I started playing professionally about a year and a half ago. My dad (Wayne Milsted) is a jazz guitarist and my mom plays piano and flute. She was a music teacher for elementary school kids. I’ve been into music since I was really little. I’ve been living in Oregon since I was four. Mom is from Louisville, Kentucky, and Dad is from Mississippi. My brother likes jazz a lot too.

I went to the Arts Communication Magnet Academy in Beaverton from the seventh grade through high school. ACMA is a public school, but you had to write essays and audition for Thara Memory to get in. Shortly after getting into ACMA, I decided to be a professional musician. I was in the second band led by Ronnie Harrison, so I took lessons from Ronnie that year. The following year I took lessons from Kenny Polson. Those were the guys that got me to take it seriously. By my freshman year, I had moved up to the top band, but unfortunately that was the year Thara left ACMA to go to the Pacific Crest Community School. After ACMA I joined the group at Pacific Crest, so during high school I was doing both programs at once.

After high school, I ended up going to the Berklee College of Music in Boston for one year. They gave me a full scholarship. It was OK but wasn’t quite what I was hoping it to be. A lot of the courses I wanted I wasn’t going to be able to take until my seventh semester. I couldn’t get the right teachers either. I wasn’t really feeling it, so I came back here and started playing professionally and decided not to go back. Boston is kind of like here, it has the same vibe, but I like it here better. I do plan on going back to college in the Fall. Nashville is a favorite city of mine, I have relatives there. So I might go to Middle Tennessee State. They have a good recording and engineering department. I’m into the recording side of stuff and want to learn more about it.

Bands: I’m currently in the Farnell Newton Band. Being on the student scene when IAJE was around, I was in an Oregon all-star student band, where I met Farnell. When I got back from Boston, he was looking for a tenor player to work with him in the Mike Phillips group, so I get hired. I’m also in Tony Ozier’s Doo Doo Funk All-Stars, the Mike Phillips Band, I work in an R&B band called Opus (composed of Seattle musicians and Portland players), and I front my own group.

Endorsements: I play a P. Mauriat tenor saxophone, and I am endorsed by them. I met them at the NAMM (National Association of Music Merchants) show last January. These horns are distributed out of St. Lewis but made in France. I have an artist endorsement which means they promote me on their website and I’ll do clinics for them. Their closest store is in Seattle. My horn is un-lacquered, so it’s dark caramel in color and has bright gold flowering on it.

Musical Influences: When I was younger, I started with Duke Ellington and was going for a Ben Webster-Coleman Hawkins sound; further into high school, it was Lester Young, Dexter Gordon, John Coltrane and Sonny Rollins; now, I’m most influenced by Stan Getz, John Ellis, Josh Redman, Chris Potter and people like that. Other influences include Weather Report, Chic Corea and Avishai Cohen.

Most Satisfying Experience: There’s been a bunch … Getting to play with Stevie Wonder was cool. Me and Farnell Newton got to play with him when he sat in with us on a Mike Phillips gig in California at a jazz festival. We played “Giant Steps” with him. Mike brought him in. Mike Phillips lives here and has worked with Prince, Stevie Wonder and Michael Jackson. He’s on MJ’s new CD. Also, honestly, one of my favorite things is hearing some of my newest music for the first time. For my album, I’ve been writing all this (material) by myself in my room with the headphones on, sitting at the keyboard; recording with people and hearing it all pieced together is one of the greatest things.

Discography: ”Keep the Funk Alive,” Tony Ozier and the Doo Doo Funk All-Stars; and on Farnell Newton’s “Class Is Now in Session.”

Future: Hope to get my new release out this summer. It will have Frank Walton Jr. on keyboards and production, Uriah Stake on bass, Chance Diaz on drums and myself on my new setup from P. Mauriat Musical Instruments with reeds from Vandoren USA. In the future I’d also like to teach, love to be on the recording side of things, always want to perform and write.

Other: I’ve been fortunate to be surrounded by a whole lot of great musicians, like my fellow students and my teachers — they held it to a certain standard.