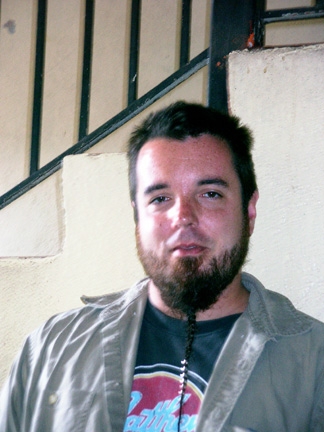 Early Years/Education: Moved around a lot as a kid but grew up primarily in New Jersey until high school. For the last two years of high school I transferred to Interlochen Art Academy in northern Michigan. I’ve also lived in Boston…went to Berklee College of Music. My uncle is jazz drummer Peter Erskine (Stan Kenton, Weather Report, Steps Ahead, etc). He talked me into moving to Los Angeles. It wasn’t quite my vibe, moved to the Bay area for four years and started working my way up the coast.

I had some friends in Eugene so I came to Oregon initially thinking I’d move to Seattle but fell in love with Portland. I love the music scene here, lots of great musicians, it’s so eclectic. My Mom is Peter’s sister. My parents met because my Dad was the bassist in the Stan Kenton orchestra and my uncle Peter started with Stan when he was 18. My grandfather, Fredrick Erskine also played bass. He supported himself thru medical school playing music.

My grandfather started me playing bass when I was 6. (He started his son Peter on the drums when he was four.) He’d force me to practice an hour a day, he had me learning scales, he’d bring home Eddie Gomez and Jaco Pastorius transcriptions and had me learn them. He started me on a full size Fender “Bullet” bass which was hard to play. Oddly enough, by the time I got a decent bass and grew into it, it seemed surprisingly easy to play. He was my primary teacher initially.

I’ve studied with a handful of teachers including Reggie Hamilton (currently an LA session bassist) who really got me going on technique. Interestingly enough, as a kid I was only given music to read so I didn’t even know that people developed their own bass lines. I quit playing bass at thirteen for about seven years and picked up the drums again, I’ve played drums my whole life.

When I started at the Berklee College of Music I went as a drum student. After a while I got lazy and got tired of schlepping the drums everywhere, so I switched to bass. I could read, had good technique but I didn’t know anything about blues changes or improvisation. So since I was about twenty I’ve been concentrating on coming up with solid bass lines, digging into the harmony and theory and learning how to improvise. My degree is in bass performance from Berklee School of Music.

I just found out that CDBaby is going to sell my book, “Erskine Bass Perspective.” This will be the first book they’ve ever carried. I also teach thru the National Guitar Workshop and the San Francisco Bass Weekend. They sponsor weeks throughout the summer at various campuses. I’m listed on MusicVirtuosity.com which offers music lessons via web cam. I just recently started thinking about doing an instructional DVD.

Most Satisfying Experience: Getting to play with Michael Manring at the Zon Ultimate Bass Concert. We each played solo and then jammed on a tune called “The Chicken” (a piece Jaco used to play a lot); recording session in Toronto with drummer Teri Lynn Carrington (it was a spoken word-hip hop session) and on an emotional level finally gaining acceptance from the bass community and companies like Zon guitars, AccuGroove cabinets and other companies I endorse.

Discography: Recently released my own CD called “Damian Erskine Trios.” It was recorded by Ramsey Embick on my own label called Notnek Music. (Notnek is Kenton spelled backwards which is my middle name. I was named for Stan Kenton.) I’m on Patrick Lamb’s “Soul Of A Free Man,” and the new gospel release, “Heavenly Brother;” I’m also on guitarist Mike Pardew’s soon to be released trio CD; my CD is doing well…an internet station from Italy voted it one of the top Latin-Jazz albums this year.

Future Plans: Want to do more clinic-group teaching gigs; when I do these I always discover something about myself in the process; start to get more on an international level with my playing…for example, I’ll be playing in Germany this January through a group called European Bass Day; keep developing my voice and playing with better and better musicians.

Other: My first actual bass lesson was with Jaco Pastorius backstage at a Weather Report Concert when I was six. He showed me finger positions for strength.